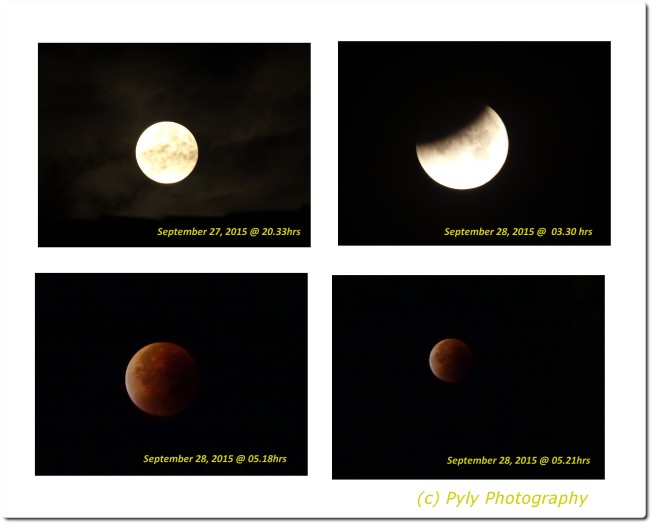 This was a SuperLunarBloodMoon moment not to miss – woke up twice in the night to take a look and a picture.

Supermoon – because it is that time of the year when the rotation of the moon brings it closest to the earth’s surface as it orbits around us; this makes the moon appear larger in the sky than it normally does.

Courtesy of Nasa: Visualizations by Ernie Wright on August 28, 2015

Lunar eclipse – because the sun moon and earth’s orbits cross and the earth ends up between the sun and the moon.

Blood moon – because of the colour of the moon during the eclipse which is due mainly to the red light from the sun being the only one that gets past the earth’s atmosphere and to the moons surface since the moon is in the shadow of the earth at that time (since at that point the earth is between the sun and the moon); the rest of the blue green and yellow light is absorbed or refracted by the earth . The colour can vary depending on the Earth’s atmospheric conditions. NB: Umbra is the conical dark shadow cast by the earth in the direction of the moon, of course due to the sun’s light falling on the earth’s surface….

Courtesy of NASA: Visualizations by Ernie Wright on August 18, 2015

What’s cool about this moon in September is that it is the 4th and final eclipse of a lunar tetra (4 consecutive total eclipses of the moon, spaced apart by 6 full moons also called lunar months). The other three were seen on April 15 2014, October 8 2014 and April 4 2015.

Looking forward to the next one! All things constant.. 🙂

More on this on the NASA website here: https://svs.gsfc.nasa.gov/cgi-bin/details.cgi?aid=4349